“These wounds won’t seem to heal, this pain is just too real…

That’s just too much that time cannot erase…”

Forgiven, but just cannot be forgotten 😥

Posted by Ummi on September 24, 2012
Posted in: Garden Of Paradise. 1 Comment

The halaqah night class today was replaced by maulid session with the nasheed group from Malaysia, AlMawlid with Ustaz Solihin joining too.

I think Al-Mawlid has the best Mahalul Qiyam that I heard so far. Their vocals and beatings are awesome. I had recorded their Mahalul Qiyam live tonight and uploaded it to SoundCloud. Check it out!

The best part was, with Hubby and Affandy’s help, I managed to get their autograph on the CD’s cover. Yes!! 🙂

Posted by Ummi on September 23, 2012
Posted in: Garden Of Paradise. Leave a comment

What else should I described the festival? Beyond speech. It was truly great. Worth the tickets. I had made the right decision to bring along my kids to the festival.

Let me share and go through the events and you can see how successful the festival was.

The opening was done by Ustaz Muhammad Nuzhan. I love it how he shared his Islamic knowledge throughout the event. 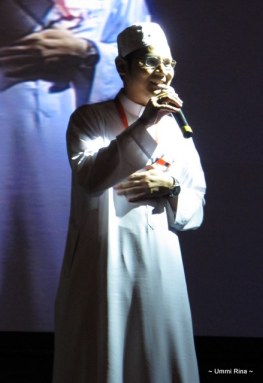 One of my favourite qasidah group, Qafilah Zikrullah lead by Ustaz Omar Maulana was next. Their vocals and performance were powerful. 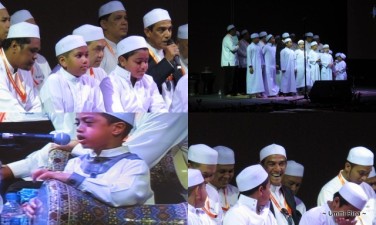 The performance by Madrasah Aljunied Angklung Ensemble really fascinate me. They were so good in playing the angklungs that Afiqah wanted to play one too! 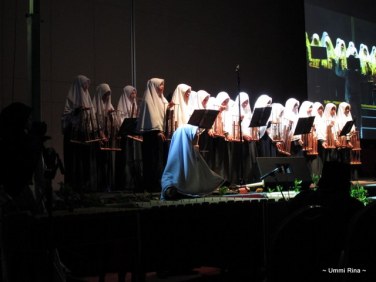 As always, Syamil and Ustaz Sofyan Yadi’s recitations soothed the ears and heart. 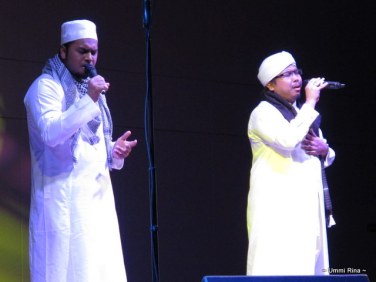 The performance that I was waiting for, AlMawlid from Malaysia!

Next on the stage was Anak-Anak Cinta Rasul lead by both my murabbi, Ustaz Solihin and Ustaz Shafi. Sad to say that my son was not selected to be on stage, but it’s ok, Allah knows best. 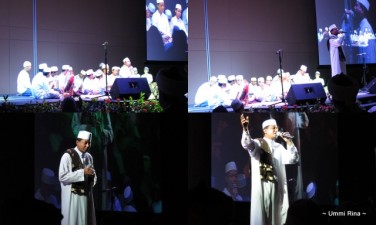 SimplyIslam Kidz performed next and awed the patrons with their voices. 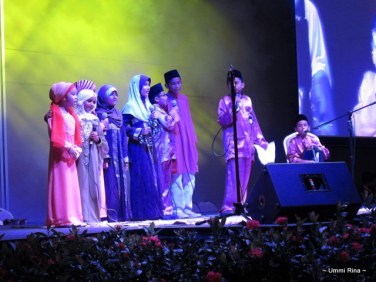 The first time I heard the voice of Az-Zahra Ensemble from USA, I was like… wow! The soft, soothing, calm voices penetrated straight to my heart. I fell in love with them immediately. Their recitations of qasidahs truly touched me. So I straightaway bought their CD for good cause and got them to autograph.

At first I was not sure why there was a performance by Azkafada Saman Dance from Indonesia, until I read the background on where this dance originated from. It was actually created by a native Acehnese religious leader. It is almost like our Dikir Barat but when I listened to their voices carefully, there was Islamic recitations. Their performance was significant too.

Next on stage were Qawali singer, A Jainullabudin Faizi, poetry recital by Nadiputra, performances by Art Fazil and NowSeeHeart from Malayia.

Though Shaykh Hisham Kabbani came to Singapore a couple of times, this was the first time I had the chance to attend his lecture. Alhamdulillah. He is one of the greatest scholars we have.

I don’t need to write on how awe-inspiring, stunning, breathtaking Madeehul Mustafa’s qasidah performance was.  Their powerful harmonic vocals while beating the duff. MasyaAllah!

The next performance was very unique. They were the Haqqani Whirling Dervishes from Indonesia. What struck me was that, they could whirl and whirl all the way till the music ended! I managed to record their performance. Simply amazing!

The last performance was by Singapore Haqqani Ensemble which was also awesome. Take a look at this video for their version of Mahalul Qiyam.

The event ended with du’a from our Shaykh Hisham Kabbani… 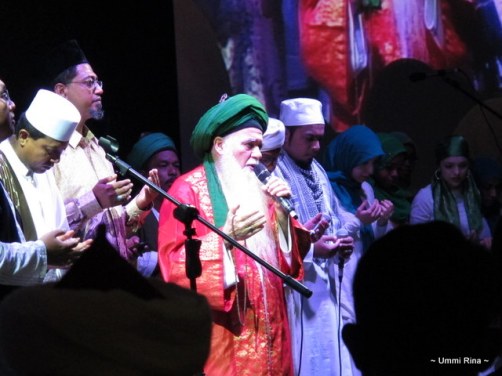 Posted by Ummi on September 22, 2012
Posted in: Islamic Events. Leave a comment

Can’t wait for tomorow! My FIVE tickets are with me now. 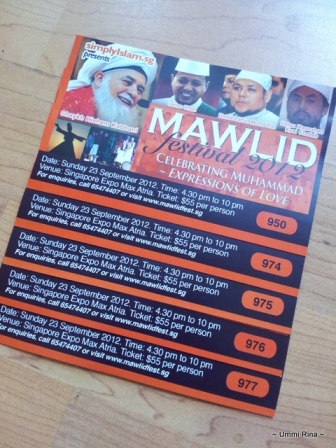 Alhamdulillah. The kids’ faces truly reflects the happiness upon the arrival of their Abah. Affandy is a little exaggerate, though 😀

As per every trip he went, the goodies for us is simply like, compulsory. These are from Melbourne… 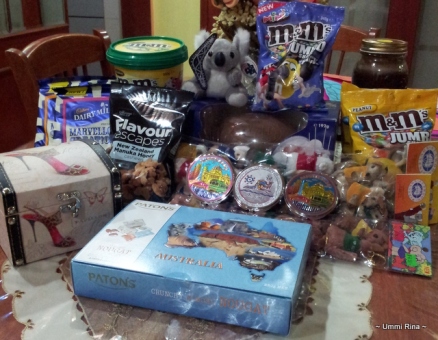 So obvious isn’t it that we are all chocolate lovers?

Posted by Ummi on September 20, 2012
Posted in: Dailiness. Leave a comment

Today is one of the days that I love about my life as a homemaker, so much. Early in the morning, all standard house chores were completely done and meals for the day were ready. Very efficient!

I am still in my birthday mood. These are presents I received from two of my close cousins and two of my best mommies friends. 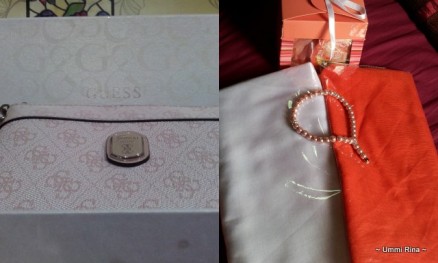 At this age, I’m a little bit apprehensive or shy when people give me presents on my birthday. Their prayers and wishes for me are sufficient. But of course if they insist, I accept them with open heart and gracefully.

The reason I completed all my daily routines early today, was because, I had a date with one of my MQG sisters. Once in a while, I repeat, once in a while, we treated ourselves with “expensive” breakfast. We, as a full-time homemakers, having these kind of breakfast is a bonus. 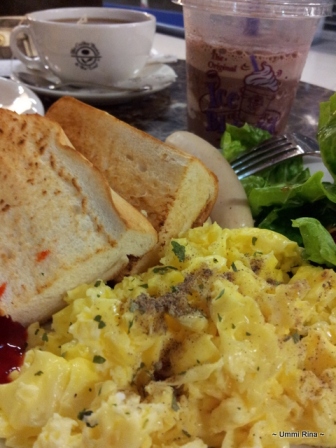 At first, our intention of meeting was just to have breakfast and chill at Causeway Point for some window shopping. Somehow, somewhere during our conversations, the thought of going elsewhere was brought up by truly yours. So from Causeway Point, we dashed to Bugis Junction and Takashimaya.

As I mentioned earlier that I am still in my birthday mood, every year on my birthday, I make a point to buy a birthday gift from me to me. I just feel that I deserve to reward myself, hence the gift. So this year, I dragged my friend all the way to Takashimaya to get this…

If this little thing can make me happy, why not?

After the expedition, sitting down to have lunch and drink were definitely necessary. 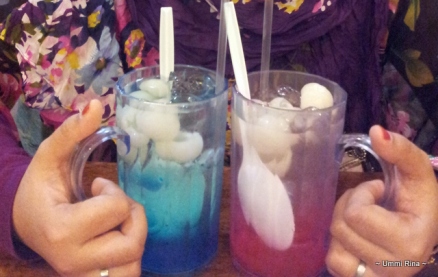 That is why I LOVE being a homemaker. Alhamdulillah!

How could I not smile reading these? They made my day… 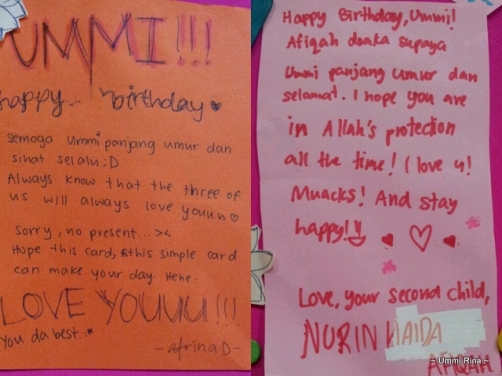 And this made me laugh so hard….!!

Journey Of A Slave
Blog at WordPress.com.